History has been made with Aboriginal communities in Victoria being the first to elect a First Peoples’ Assembly of representatives.

VAEAI President, Geraldine Atkinson, will represent the North-east after being voted in by community.

Over 70 Traditional Owners nominated for positions on the Assembly, vying for positions for the first 21 of the 32 Assembly seats.

The elected representatives are as follows

Elected Aboriginal leaders will meet in Victoria’s Parliament House in December, for the inaugural meeting of the First Peoples’ Assembly of Victoria.

“Parliament House is the centre of power in this state. It is fitting that our Assembly shares the same stage,” said Treaty Advancement Commissioner, Jill Gallagher.

“For decades, Parliament has been the origin of laws that aimed to oppress our people. Now, it is the place where we take a step towards true justice,” she said.

The meeting will involve Assembly members electing a Chair or Co-Chairs, and an Executive. All members will be invited to make a first speech.

The meeting will be held in Victorian Parliament’s Upper House chamber, which will be modified to reflect the cultural business taking place.

It will be livestreamed, to help communities across Victoria see their representatives in action. 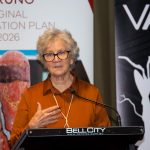