VAEAI staff, associates and stakeholders met for a Treaty Circle discussion on Tuesday the 16th of July 2019 at VACSAL Northcote.

The event was successful in allowing the parties involved to discuss the ongoing negotiations for Treaty as it is implemented in the state of Victoria.

VAEAI Vice-President, Mark Rose, chaired the event and re-iterated the significance of a Treaty between Koorie communities and the Victorian Government.

“It’s of the utmost importance that we work through the process thoroughly to ensure that it is carried out in a manner that guarantees success.” Said Rose

Ms Gallagher described how the Treaty process was legislated via the Aboriginal Victorians Act 2018, which was introduced to support the establishment of an Aboriginal Representative Body.

This Representative Body will work in partnership with the Victorian Government to develop the different elements of treaty.

An Aboriginal Treaty Working Group was established by the Advancement Commission in 2016 to develop options for a representative body.

The Aboriginal Treaty Working Group tabled their final report in 2018, outlining the process for creating a democratically elected Aboriginal Representative Body that captures the voice of Aboriginal communities across Victoria.

This Aboriginal Representative Body will be called the First Peoples’ Assembly of Victoria and Ms Gallagher emphasised the importance of all Aboriginal people in Victoria to enroll and engage in the voting process to ensure that their voice is heard.

This voting period will be open from the 16th of September until the 20th of October 2019 and VAEAI will publish further information regarding the process. 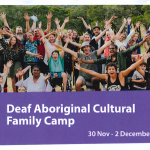